Last week, I ordered a MacBook Pro from the Stanford Bookstore. With educational discounts, I got a monster of a notebook and an iPod nano (which I’ve yet to play with). Just because I feel like boasting, here’s a rundown of the specs:

I think the coolest difference yet is that they replaced some software called “Windows XP/Vista” with “Mac OS X.”
Not that I dislike Windows. I’ve used it on all of my home computers before, and while processes might be convoluted, I’ve managed to do what I need with it.
Like many other people, however, Windows is what I’ve always had, and I’ve gotten used to it. Inured to it. Allegory of the Cave, maybe.
Perhaps I don’t have the mind for using Windows or Linux. While I consider myself technically knowledgable, I’m not the type who feels the need to hack from the command line, or buckle down and go through complicated options in the cases when I need the extra capabilities or power. And so, I have a Mac, and it’s great.

Of course, you get the pictures of me unpacking and opening: 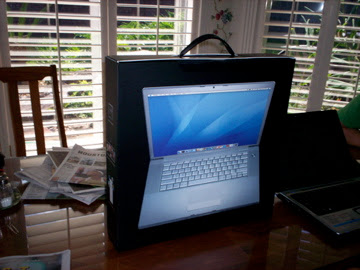 You can see my sister’s HP on the right. Kind of like Godzilla in a cage next to a teddy bear. 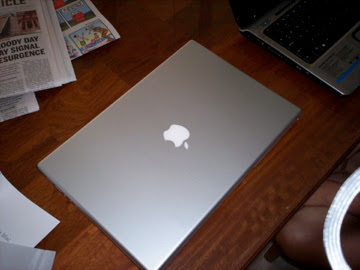 I think that’s my mom’s leg in the bottom right. 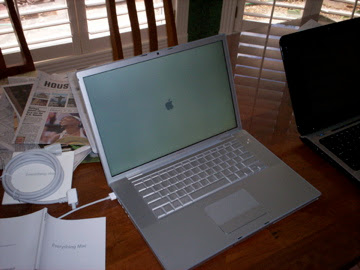 There’s definitely a learning curve to this. Certainly not as steep as switching from a Mac OS to Windows, but definitely some stuff to get used to. Fortunately, there seems to be help and help files for just about everything, so it’s not too difficult to get it to work.
The ads say that these things work right out of the box, which is pretty much true. First time running was much better and faster than setting up Windows, and I instantly had internet connection and everything I needed for basic functionality.
I guess the first thing that I noticed is that it looks really nice. The screen I got is flawless, and with LED backlight, everything looks crisp, vibrant. Even if not familiar, the OS is designed intuitively, and I didn’t have a problem figuring out how to do things.
I probably should’ve written this sooner, since I’m at a loss of what to say now, but overall, it is good.

One reply on “Making Life Easy”

Well, you’re a real Silicon Valley type now. Getting a Mac while the rest of the world is still using PCs.

I was reading on Download Squad that developers of shifting from Windows towards Linux (and the Javascript in browsers).

The next question will be about whether you’ll install personal productivity tools (e.g. word processing, presentation graphics) that are commercial, or whether you’ll go with open source software (e.g. opensourcemac.org).

You’ll have to figure out whether it’s really worth it to install Vista on that laptop or not. So far, on Diana’s Mac, it’s all open source and Google Apps (via Firefox). It’s a short port from Unix over to Mac OS/X for many programs.