There’s the common perception that techies are somewhat spacey, unaware of what’s actually going on in the world. When programmers spend their time building artificial creations in virtual spaces, sometimes it’s hard to find the connection to the plight of the unemployed, or international conflict.

Which might be a little true of me. My google reader is filled with techie stuff, and my desperate attempt to stay relevant includes morning news digests from MSNBC, NYT, and the Toronto Star by email, and a constant backlog of the New York Times that I end up reading at all once on the weekends. I at least pretend to be well-read by keeping a vanity stack of newspapers in my dorm room: 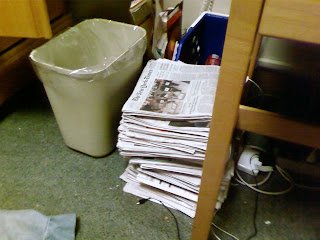 Regardless, when I saw that Pervez Musharraf, former President of Pakistan, would be speaking on-campus, I knew enough to know that this was a big deal. That might be just from watching CNN in China because I had nothing better to do at that time, but I think that counts.

Musharraf is a particularly interesting speaker to have because he’s not very popular with the western media or people. On-campus speakers often fit the ideal American persona, having made a significant contribution to society that everyone recognizes. On the other hand, I don’t know if I agree with everything Musharraf has done. He came to power in Pakistan under dubious circumstances and has removed political opponents from office. But I think that makes him very interesting to listen to.

A lot of others students agreed, apparently, and the line in White Plaza on the first day was definitely one of the longest I’ve seen on-campus: 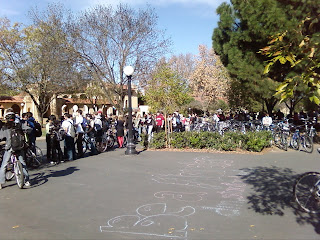 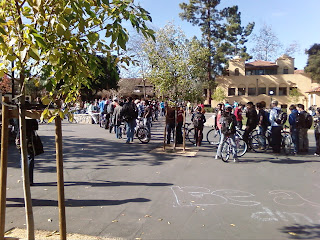 Tickets to the event at Memorial Auditorium (seating 1600, according to Wikipedia) were gone before the end of the week, and on Friday afternoon, the building was definitely filled.

Musharraf started with about an hour long speech about terrorism and how to fight it. His stance on terrorism was long one of the important reasons why the American government supported him, and I certainly believe he’s earnest in his desire to end terrorism. He talked broadly about the causes of terrorism and extremism, often using Pakistan as an example. While I agreed with everything he said, I realized afterward that few wouldn’t. Talking at such a high level, he preached accepted morality and reasonable deductions on the topic. What I would have found potentially more interesting if he had talked more about what Bush would call the “tough decisions.” In the real world, everything isn’t perfect, and we have to make tradeoffs–even between natural rights and ethics–to achieve our highest goal. Musharraf has certainly appeared to give on political freedom to gain on stability, and I would have found it much more compelling (though only potentially convincing) had he spoken about that.

Following the speech was a 45-minute Q&A session moderated by a Stanford professor, which was much more interesting. There were generally 3 categories of questions:
1) Obscure. As I mentioned, I’m not really hot on the whole current events thing. Thus, when someone asks about the house arrest of some scientist selling nuclear designs or signing a document in 2007, I don’t actually know enough to understand the importance of his response. Regardless, I was certainly glad that there were a couple of these. When I saw Bill Gates and Stephen Hawking, I was disappointed because I don’t think anything they said was directed towards a knowledgable crowd. Maybe it means nothing to me, but I’m sure that there are IR and Poli Sci majors who were waiting for it.

2) Angry. Musharraf is controversial. Stanford students are pretty political. Thus, there are people who are very, very angry at him for things he’s done. While I can understand the ire of those asking accusational questions, I find the act somewhat self-serving. Maybe those individuals will feel better to yell at Musharraf to his face, but their emotions basically allow Musharraf to bat the question away as meaningless. While it’s cool that he’s here, we’re not the UN, and he’s under no obligation to answer these questions.

For example, one student asked him (paraphrased), “What percent of the Pakistani government and agencies, including military and intelligence, does the government actually have control over? And don’t say all of it, because that would undermine everything you’ve said today.” And an awesome answer. Musharraf: “Where are you from?” “India.” “I knew that.” After the laughter died down, Musharraf instead gave a short speech on how India and Pakistan need to stop hating and accept that the only way to move forward is for everyone to come together. Brilliantly political response, I thought.

3) Cheeseball. There were a couple cheeseball questions which Musharraf responded with some more generally good statements. Not interesting.

In the end, I don’t think I got anything from the appearance that I couldn’t have gotten from reading or watching press releases. Perhaps the real benefit for me was to have almost 2 hours to just think about what he was saying and do the good thing of paying attention to events, for once. Musharraf apparently is THE big speaker of the year for the series, but I hope we’ll have just as interesting people to make even spacey students like me think on something new for a little.

One reply on “Musharraf”

Your pile of newspaper reminds me of my days in Evanston, IL, away from Toronto. I can't remember if I was subscribing to the Toronto Star or the Globe & Mail at that point, but it was one or the other. Having a Canadian perspective on the news — even it's late — provides a different view from the publications in the U.S.

On seeing lectures in person …. I'm interested in ideas, and do my share of reading, but seeing a person speak in person — or as second-best, listening to an uninterrupted audio recording in a lecture or interview podcast — helps to fill more context from an understanding of the person.

It's not unusual for me to lurk in an audience when the speaker will have heard of me in another context, but I prefer initially lurking to get a sense of whether I really want to engage with that person or not. There's been a few times when I've really admired a person's writing, but then observed that he or she is essentially a jerk, and not someone I would really want to have a conversation with. Some people are better at distance.