Yesterday, my family took a bus out to the Super Brand Mall, directly across from the Pearl Tower (which I think is our target for today. You’ll find out tomorrow, or tonight). Eight floors above and two below ground, the mall is big. I have the feeling its more for the tourists, as it’s very pricey and filled with foreign retailers, but it is what Shanghai is showing to the world.

The thing that triggered this blog topic were the models. The walls were plastered with them in the shops, just like in any clothing store in the U.S. Just like it, in that a lot of them weren’t Chinese models. Is that the spectre of the west? Maybe. The styles seem so influenced by western culture.

The incursion is more explicit in other ways. By suggestion from my airplane seat neighbor, I tried the McDonalds here, order a 6 RMB (just under 1 USD) cheeseburger. It was kind of pitiful looking, actually. The patty was kind of thin, and I think it went bun-patty-pickles-cheese-bun. On the other hand, I really don’t remember what a McDonalds burger in the U.S. tastes like, and the last burger I’ve had was an In-N-Out burger (read the last post). So I was a little disappointed. Even so, I didn’t feel it was much different. The menu was even familiar, with a “spicy chicken wrap” that hearkened to diet fads. The one oddity was that instead of fries, the other side was a cup of corn. Is that on the U.S. menu?

I guess the last significant stop (for me; the first 4 floors of clothes shopping are something of a blur to me) was the Chinese bookstore on the top floor. Of course, it had a wide variety of Chinese and non-Chinese books. The section that caught us, however, was the kids section book. Particularly, the Dr. Seuss books. How sad is it that after 10 weeks of Chinese at college, I can’t even read Dr. Seuss? Oh well. Looking around the kids books, it seemed like many of them were also from western sources, like Dr. Seuss. That’s even bigger, if kids are reaised on that culture.

Oh, and in the grocery store, we found Chinese twinkies: a synthetic cream surrounded by a maybe sponge cake-ish bread. Not bad. 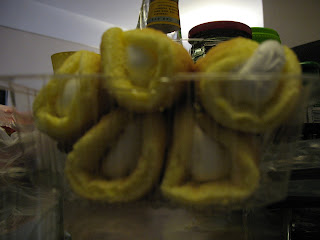