When I need to get work done, I sit in the chair I’m sitting in now and go for it. True, my room and computer do provide many potential distractions, but I have all of my comforts here as well. I could go to the library, but I feel like I work well enough here.

Due to a series of lucky circumstances, my draw group of originally six ended up being split into a double (RJ and me) and a triple (Tom, Ben, and Jordan), located down a hall, around the corner, and down another hall. Close enough to be convenient, but far enough to require effort to get there. The arrangement actually works out quite nicely for me, because whenever I need a break, I head down to their room. It’s huge, and it’s the party room. Attractions include:

a 53 inch TV! My draw group pitched in $20 each to get a $100 TV off of Craigslist, and it’s been an excellent investment (the owner sold it cheap because of the glare, which you can see in the picture). Add in RJ’s xbox 360, and my crappy antenna from home, and we have the best entertainment it can provide. Halo. Guitar Hero. 30 Rock! 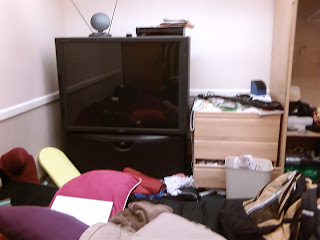 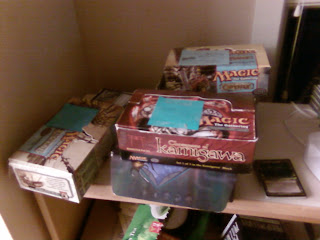 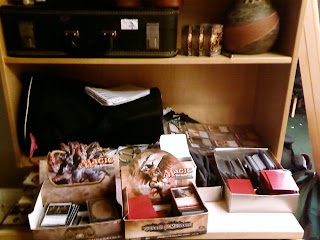 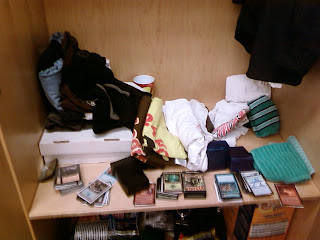 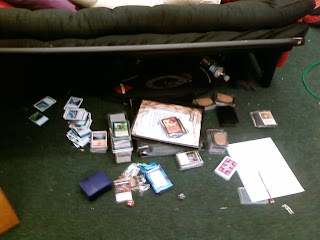 This is actually kind of putting it in perspective for me as well. 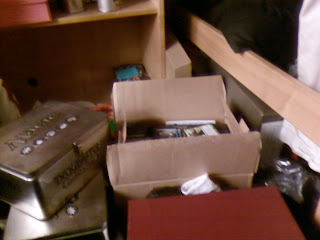 Tom has the largest collection by far, but I’ve made some significant contributions as well. We managed to suck our other drawmates in as well, resulting in an amazing amount of overvalued cardstock.

About a week ago, Ben made an interesting observation about my breaks. When I hopscotch over there for a break, it seems to take one of three forms:

Level 1: ~5 minutes. Sometimes I just need to stare at something else for a few minutes, so I’ll disturb Ben and Tom to find cheap entertainment. I’ll usually find some toy (like a ball or can) to fiddle with. I feel like this ia an okay type of break and will probably take a couple of these each evening.

Level 2: ~15-20 minutes. After having finished some major task, I’ll lie to myself and pretend I deserve a break. I’ll ask someone if they want to play a game of Magic, which takes as little as 5 minutes up to maybe 20 minutes for a normal match. When I’m in level 2 mode, it usually means I have more work to do afterwards, so I’ll put a cap on the time I spend. These will happen maybe once an evening, though that’s certainly not a requirement.

Level 3: >1 hour. Also known as endless Magic. On evenings where we don’t have work to do (think normal party nights, Thursday-Saturday), a couple of us will slowly congregate in the triple. At that point, Magic usually comes up, and we’ll start playing a multi-player match, which takes tremendously longer than a 2-player match (exponential relationship between # of players and time). Since we’re all good friends and know each other’s decks though, we’ll either have a grudge against someone because of their cards or the last match. These will perpetuate, and we’ll have to play another match to either attack/defend the title. Which then requires another game. And another. Until despair sets in when the clock says it’s several hours later than when we started.

My estimations for time and frequency are, like any anecdotal evidence, skewed. Maybe I should keep start writing down such information whenever I take a break. I’m kind of curious about how much shuffling cardstock has consumed my life.

(Edit: By the way, if you want to see some of what we’ve been working on in CS147 – Intro to HCI, check out the video prototype for our app idea. Let me know what you think!)